LA Stories: A Weekend in Reds and Blues

Saturday was to be the big day. I was scheduled to work the Matrix/L'Oreal hair show, and they were going to dye my hair red. I wanted some serious "F**K YOU" red hair. Instead, I got a new shade of shame...

We're supposed to arrive at 9:00AM, and unfortunately I was running precisely on time. I'd had a later night than intended on Friday, so I bitch-slapped my alarm clock's sleep button about 5 times too many. This resulted in a hap-hazard "ehhh screw it" cursory glance in the mirror. I looked like ass, but a professional was about to fix that for me! Hooray!

I arrived at the Luxury Hollywood Renaissance Hotel with a few minutes to spare, so I left my car in the valet area and went inside to determine whether or not I could be validated, since I was working at the hotel for the day. Negative. I moved my car to the nearby pay lot and ran to reach the prep room on time. I figured I could always move my car to the hair show lot (if there was such a thing) as soon as I met my contact. It was exactly 9:00 when I arrived, out of breath and probably a little more frazzled than appears attractive. Even so, it was allll about to be washed away...

I was a little leery of this hair show- particularly Matrix, because they'd cut off WAY too much hair during a "trim" last time. 6 inches, to be precise. But this time, as long as they didn't try and trick me into cutting my hair short, I wanted a change. I wanted to be sexy, and beautiful. I'm tired of wearing my emotional state on my head, on display for all to see that I'm clearly "in-between."

I opened the door to the prep salon and flashed my best smile to the first person I saw, who happened to be a horrified-looking fabulously dressed man.

The man's eyes got wider as he literally shrank away from me, pulling his hand away and clutching it tightly to his chest.

Puzzled, I pulled out my iPhone to confirm: "Oh, I was pretty sure my contact's name was-"

"Your hair is BLUE." 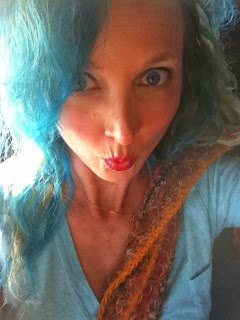 At this point he seriously looked like he was about to throw up in his mouth. He began to back away from me, shaking his head. "Why did you DO THAT? I have to call your agent. This is..." Covering his mouth with his hand, he began hunting for a cell phone.

"Ok- in the meantime, where do you suggest I park?"

Mercifully, my agent (who is well aware of my blue streak) did not answer the phone, so the man I can only assume is Michael held a quick whispering conference with two other stylists, who approached me with sympathetic looks and a photo of what looked like a GI-Jane sort of model with buzzed hair and a single curl on her forehead. In soothing, hushed tones, they stepped close to me as they spoke, like they were dealing with a wild blue-haired animal.

"Honey, we know you need the work, but if we color your hair it'll snap right off..."

"It's SO DAMAGED, it'll just break right off."

"So why don't you let us cut it SHORT and dye it?"

"That would be so cute on you."

"But it means you'd get to keep the job."

"Yes, think about the job- and you'd look so cute."

"Why don't you want short hair?"

"It's too much of a change for me right now," I said, backing up ever so slightly.

"Change is good," one said, stepping forward towards me.

"Yes, change is gorgeous." the second one steps forward too- I'm cornered now. "Why don't you want some change?"

"MY HUSBAND JUST LEFT ME," I blurt out, bursting spontaneously into a fountain of frizz and tears. "I DON'T WANT ANY MORE CHANGE!"

Dead. Fucking. Silence. You could hear a hair fall.

I'm horrified at the emotions pouring from my mouth and my eyes. I know my nose is next, so I tried to reign it in before it got worse. I snuck a peek over at Michael, who is staring at me in abject disgust with his mouth hanging open.

The two-headed monster lowers their buzz-cut model photo and takes a step backwards.

My total bill for parking wound up being a dollar. That's how long it took to reject me. The only logical thing to do at that point (since I no longer had to appear on any runways that weekend) was to stuff myself with breakfast at Kitchen 24 with my friend Dani, who looks amazing with her super short hair and curl on her forehead.

Then I went home and sank into a depression coma.

That night, I joined friends for dinner, and a passing drunk woman with super short hair told me how much she liked my blue. Sigh.

...The next day was better. I had lunch with friends. The only red in my life came from Blazin' Buffalo Wild Wings and a tied wing-eating competition with a gorgeous short-haired Audrey Hepburn lookalike. Short hair was haunting me- and matching me wing-for-wing.

I had one more spontaneous breakout that night as I cried with the sudden realization that I will surely die of mole cancer, because Jay had been the one my dermatologist made promise to keep an eye on my back moles for me. I suddenly got really sad while watching a movie with friends and announced dramatically that I would probably get mole cancer and die. (I'm allowed a few self-indulgent moments- I've been through a lot.) The three boys I was on the couch with sandwiched me while one of them sang the theme song from Cheers and they volunteered to check my moles for me right then and there.

As I laughed and cried through my nose, with my funny, handsome friends holding me tight, I suddenly felt much much better. Screw the hair show, and their bait-and-switch evil ways. I have a frizzy mane of blue-blonde-and-roots, and my friends love me anyways. Jay didn't leave me because I'm ugly, even if it made me feel that way. Jay left me because of Jay. And no man is worth changing who I am, inside or out. So I will not be cutting my hair or experiencing any drastic changes any time soon. I'm fine how I am- damaged, frizzy, breakable- and loved.

The very next morning, I showed up at my temp job to discover that the bitchy girl next to me had cut her hair shockingly short over the weekend. It looks terrible. I smiled.
Posted by Jaime at 11:05 AM 1 comment: