There’s a Guy’s Guy in South Florida. You know the one: rocking (ironic) 80’s sunglasses while posting selfies from the gym. Checking in at the GNC and touting the virtues of the latest keg of Protein Powder. He works at my restaurant and I named him Man Bun. 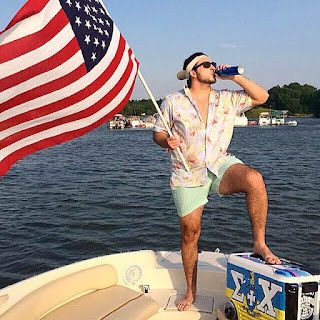 This isn’t him but it’s shockingly close.

Man Bun and I work different jobs so we never really interact. I’m the one hiding behind the hostess stand, reading Nabokov, and he’s the one pretending to wipe the bar and yelling at the sports people who aren’t sporting as well as he’d sport. At some point during our traditionally slow spring season, Man Bun suddenly turns off the TV with the remote, and when I look over at the sudden silence, out of nowhere he asks me what I thought about Pool Parties. It wasn’t a random question since it was balls hot outside. Never shy about voicing my opinion, I told him I am vehemently pro-pool party. This was the first actual conversation we ever had.
Man Bun begins posting restaurant-wide invitations for a summer-long series of parties thrown at a different pool each week. The servers, cooks, bussers and hostesses dutifully stock up on inflatable toys and beer in preparation, and, sure enough, the Hit Parade begins:

A rooftop haven in Hialeah.
A patio in Punta Gorda.
A kegger in the Keys.
An oasis in Ormond.

As the days roll by, sluggishly, insufferably hot and balmy, each Friday an invitation appears on our kitchen cork board. It pops up out of nowhere, with an alluring photo of the pool awaiting us on the weekend, just around the corner. The photos grew more and more seductive as the temperatures outside skyrocketed, and when my schedule finally allowed a Saturday off, I jumped at the chance to attend the Miami Rooftop event, complete with Miami scene kids and Miami parking hell and all. 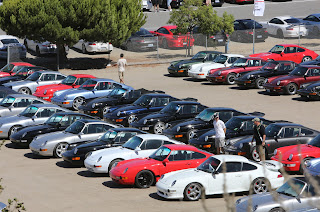 I arrived early, because I was distracted and forgot that arriving early is stupid.
Man Bun, who HAD to arrive early because he was the host, showed up shortly after me, toting a cooler full of beer. He pounded a few back, quickly, nervously. When I asked him why he seemed anxious, he told me that he felt a sense of responsibility towards these parties. He wanted just the right atmosphere, just the right mix of people, just the right mix of margarita. It was endearing watching him worry about whether or not his friends were having a good time. On a rooftop. In a pool. In, essentially, fucking paradise.

I was slightly bummed that my boyfriend couldn’t join me — he’d been working odd hours and unable to indulge in pool time. After asking about him, ever polite, Man Bun remarked how lucky I was to be in a happy relationship and that he hoped for a relationship like that one day. When he was done banging bar bitches, of course. He tapped his 3rd Coors to my 1st Tecate and fluttered off to Social Butterfly.

The sun began to set beyond our spectacular view of the neon jungle below. I floated, cloud 9-ing it lazily and gazing up at clouds 10 and 11, which floated lazily in the sky and gazed back at me on my inflatable donut. Just as the dreamy surrealism of swimming in a mirrored liquid sunset soaked in, Man Bun drifted by on a large swan, and we exchanged hellos. I asked him how he was feeling about his turn-out, and he said he was happy, but a little bummed because the one girl he was hoping for hadn’t shown up. I sloppily gestured my beer at the bevy of Miami hotness dangling gym-perfected electrolysis model legs in the pool. Pedicured toes sparkled just inches underwater, like coins in a wishing well. But Man Bun just shrugs.

“They’re hot, yeah, but that’s it. I get bored fast. And I’m bored with being bored.”

He taps his 7th Coors to my 3rd Tecate and Swans off toward the Deep End.
I’m more than a little surprised — I had him pegged as a Shallow kind of guy.

Later, he’s leaning over the railing, staring off into the twinkling lights of the city as they shimmer in the pre-dusk sepia sky. There’s a green light off in the distance. Maybe a house, maybe a helipad. Who knows. But he’s staring at it.
“See that,” he asks, gesturing with his ??th Coors.
I nod, taking a swig of that same 3rd Tecate. (I’m driving home soon.)
“That’s me,” he says. “I’m that green light. I just keep throwing these parties, hoping she’ll show up, and she never does.”
I fail to follow, and he sighs.
“Ah, c’mon,” he baritones, disapprovingly. “I thought you were the reader here.”
“…What book are we talking about?” I ask.
“Great Gatsby, duh.”

Ohhhhh! Now I get it.

The (green) lightbulb pops on. The girl across the water with the green light on her dock, the unattainable symbol of
perfection, and the subject of obsessive desire for F. Scott Fitzgerald’s love story. Man Bun has been throwing these parties not to get girls, but to get a specific girl. He has a Daisy Buchanan!

He belches and crushes the empty can against his forehead, chucking the aluminum shell towards the trash. Somehow, in the waning light, he still makes the shot, but he’s not paying attention. He’s already mid-canonball once more into the water.
I can’t make next week’s party but send an apology via text, which Man Bun replies to, demanding I bring extra beers next week as penance. Twist my arm. I ask him if Daisy made it to this one, and get a sad emoji in response.
Next Saturday rolls around, hot and sticky, and I had a shit day so I decided to track down the weekly pool party’s address in a suburban neighborhood. Man Bun’s eyes light up when I round the corner. “YOU CAAAAAAAME!” he bellows in his signature Viking yawp, and for a moment I forget how bummed out I am. I hold up two bottles of wine as a salute. It’s a two-bottle kind of night.

“I need a corkscrew, and hug, in that order,” I announce. Done and done. One bottle was for the party, and one was for me. I swirl around in a turquoise inner tube and my own head, both spinning circles. I stare languidly at the dimming sky above, as bats explode from their secret hiding spots and start their morning commute. I’m wrapping my head around some bad news — I didn’t get the Agent I wanted. I’m in a full inner tube with a burst bubble. Writer Problems. I float and grieve and after way too little time I’m out of wine. MORE Writer Problems, and I’m a little drunk and I hate everything.

Man Bun is playing ping-pong with what has to be three Victoria’s Secret swimsuit models, but his eyes are on me. He hands his paddle off to a friend in (ironic) lobster-print board shorts and dangles some legs near where I’m sulking in suspended animation. I look at his calves and drunkenly wonder how much of his life he has spent in a gym.

But he sits in silence until I open up. I tell him what’s wrong, and he listens and we joke around. He asks me how things are with the BF, and I perk up as I describe the plans we just made for our next road trip. Seeing his guest more cheerful, Man Bun, ever polite, tosses me a Tecate and a thumbs up and goes to mingle around. Feeling better, I spin and spin until dusk becomes stars and my problems feel smaller and further away, like the little bats as they vanished into black night. Man Bun is back at the ping pong tables.

Later, those tables are turned: I’m sober and he’s not, but he walks me to my car anyway, ever the perfect host. “I’m really glad you came,” he says, opening the door for me. “And I’m glad you and your guy have such a good thing going — he’s a lucky dude.”

I close the door and strap my seatbelt on. He tells me through the glass to get home safe, and through my rearview mirror I see that he stays out on the sidewalk under the singular green streetlight to watch as I drive home to the man I love, and I’m wondering why he doesn’t just go back to his party when I realize…