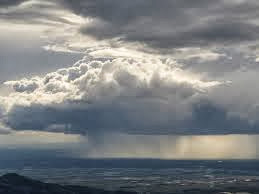 "What was the best sex you ever had?"
...Apparently, this is a terrible question to ask a significant other. Especially if the answer isn't them. In my case, though, I'm a firm believer in honesty being the best policy- especially when that honesty brings such a smile to my face.

They say it never rains in Southern California, but it pours, man, it pours.

There's so much smog and desolation in the air- all the shattered dreams and lies hang above the city like a veil of sadness. The longer the valley goes without rain to wash the pollution away, the harder it is to breathe. Things get too tight and too dry- the strangling days. As a Florida girl, I'm used to moisture- rich, wet healthy air in my lungs. The end of October marked a massive drought for the City of Angels- we'd gone months without so much as a cloud, and the radiant new clear sky which follows the briefest of showers was a distant hazed-out memory.

The desication was killing me- months with no reprieve. I knew I'd be heading home soon, but distant longing for a breath of fresh air 3,000 miles away wasn't enough. I felt mummified- at the end of a long night of work, I could taste the salt on my own skin. I was practically girl jerky. I wanted- I NEEDED- clean air. I needed to breathe. I needed clouds and frogs and puddles and umbrellas and rubber boots with whales on them. I needed RAIN. I also needed other things, and the gentle-voiced guy behind me in line at Wardrobe seemed like the man for the job.

I'd seen him around- tall, soft-spoken with liquid chocolate eyes and thick wavy dark hair. The kind of hair you wanna wrap in your fingers right before your hand spasms into a fist of ecstasy. But I'm getting ahead of myself... "I'm willing to bet you're into martial arts," I said. "Yeah," he shyly grins a million-watt smile at me. "Kung-fu, for, like, 14 years. Why?" I explain to him that with 14 years of Tae Kwon Do under my (black) belt, I calls 'em as I sees 'em. We chat for a while. Martial Arts, Martial Arts movies, Chuck Norris, horror movies. I wasn't expecting him to have a personality, but by the time we'd turned our costumes in I was pretty impressed. Southern boy, pilot's license, air force dads in common, the same horrible taste in movies I value so highly. He's... how you say... a Good Get.

We exchange info and keep in touch- a few days later I'm cooking him dinner at my place, and the next week we're at his place. Credits roll after a horrible shark-themed horror film concludes. I'm explaining that I'm leaving town soon, that I don't want a relationship, I just want... wow. Yep, that was a kiss. And a really good one, too. He tasted like pure Amazing. Like the first sip of coke in a lifetime of water. I lost any sense of anything other than the sensation of his mouth and his body pressing against mine. My stomach full of butterflies and white noise, I stopped talking at that point. I wanted my mouth free for more important things.

It's a funny thing, being touched by hands so soft you melt away yourself. I'm completely used to being the loudest. The brightest. The funniest. Because I have to be. I'm generally alpha-female in any social setting, so when I was able to shut off the carnival in my head and relinquish control, the silence was stunning. The vacancy left by the cessation of my own nonstop chatter left a calming clarity, and space. And I ached to fill this space with him.

He has a greek god's body, wrapped in velvety smoothness covering taut muscles. Lean, strong, warm and safe. Touching him reminded me of those magic spheres they sold at gift shops- I was amazed tiny purple electrical lightning wasn't visible in the narrowing gaps between our skin. Taking his clothes off was Christmas morning- marble-smooth skin covering a physique carved by Michelangelo. He was the most beautiful of all creatures. And he was naked. And he was mine.

Relinquishing control is usually hard for me- but I surrendered quite willingly to him. For the next however many hours, I wasn't paying attention to hours. I wasn't aware of anything other than sensation, warmth, and being held and loved and moved and touched. I fell asleep after, next to him, after he held me and kissed me goodnight. His bed was the softest white cocoon of infinite thread count, his pillows all-enveloping marshmallows. For a chronic insomniac, I collapsed easily and quickly into the deepest sleep I'd known in a long, long time.

That night, buried beneath his downy gossamer covers, I dreamed of white clouds turning gray. Building, rising, tumbling together, friction, electricity mounting, escalating, creschendoing and BOOM exploding into rumbling, echoing thunder. I dreamed of rain. We were deep within the belly of his apartment complex, sandwiched between multiple levels of concrete and wood- there was no way I could have known, but somehow that night, IT RAINED.

HE F*CKED ME SO HARD IT RAINED.

The skies opened up and pure, clean water fell through- the stratosphere burst and deluged the night air, refreshing, replenishing, cleansing away all the bad dreams and anger. I woke up the next morning to a new day in every way. Kissing him goodbye on my way out, I opened his door prepared for the harsh morning sun and instead was greeted with all the wetness a girl could ask for.

He f*cked me so hard it rained. And for that, I thank him. I walked casually down the sidewalk, all soaked and Gene Kelly with every lamppost and puddle, to my car. I got in and joyfully turned on my windshield wipers for the drive.