When I moved out here the first time, I had these recurring nightmares about a dead baby. It was always the same- I'd see it floating face-down in the Los Angeles River, all blue with mottled flesh, and I'd slide down the long smooth concrete wall into the pit, where I could wade through the nasty water and reach it, try and flip it over and give CPR. Once I was trapped, however, just as I turned it over, the baby reanimated as a zombie monster baby- it was dead and it was angry. It was so strong, and it had teeth- it tried to pull me into the water with it, trying to hold me under and I'd fight to break free. I'd drop it in the water and try to push it away from me, then I'd take off running. I just ran, and this baby got faster and faster and I knew it would drown me and eat me alive if it caught me, and I, too, would be just another body in the river. 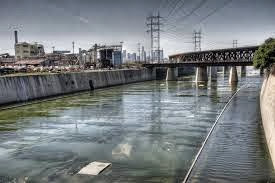 I recall waking from these nightmares shaking, and staggering over to a mirror in the harsh flourescent light of our tiny Hollywood bathroom. I could see my veins through my increasingly translucent skin. My sunken eyes stared back at me. I looked like a zombie. I would brush my teeth and spit out mouth-fulls of blood into the sink. I'd run a brush through my hair and sob as it fell out in clumps.

I was becoming a zombie, one restless nightmare at a time.

I brought a fistful of fallen hair to my ex, to try and show him something was wrong, that my body wasn't "taking" to the city.
He blew me off. "Everybody loses hair."
I tried to put the hair in his hands- to show him how MUCH there was- it wasn't a normal amount, I was sure. I showed him my bleeding gum line, and he told me to brush more gently. Later, he told me he wasn't so sure he wanted to be a dad anymore, and I realized exactly what my nightmares were about: the dead baby represented the miscarriage of my dream. And there I was, trying to force him to take responsibility for me when I was half-dead already.

I completely understand why he didn't want to hold my hair-he wanted no part in my half-life. He had clubs to go to, after all.

We'd been picking out baby names together at one point- and LA was the next big step to take in the adventure that would be our lives together- but I let my stress consume me, and he discovered he preferred a life without responsibility. I was sick and depressed and exhausted all the time in the city he wanted to party in, and as my relationship crumbled my subconscious knew before I did: LA was killing us, and it was killing me. If I kept trying to resuscitate that dying baby, I'd drown in the process.

I don't know if I ever would've been strong enough to make that choice- even though it became clear that he did not love me, I believe, even at the time, I never would've left. Fortunately, he made the choice for both of us, and my dreams, nightmares and all, were ripped away from me and quickly resettled with another woman.

I struggled for a long while, but it wasn't until I'd moved back home and truly realized that I was recovering not only from a divorce, but from a psychic miscarriage. All my hopes and plans and wishes and projections walked out the door with him. I would never live in the city of Angels with the man I married. We would never be parents together.

So much time wasted... just how much did he cost me?

I wound up at a Native American full moon ceremony under a tent, throwing water from an earthen jug into the pile of hot coals in a pit in the center. Everyone in the tent "let go" of something individually, then as a group, and as we threw the water onto the coals, the HISS of the steam became the sizzle of the pain vanishing. I "let go" of my dream. My old dream. I said goodbye to Hollywood- I said goodbye to my baby. I let the dream die. In accepting that that life had ended, I suddenly felt free to start a new one- just like that: no more zombie.

The group burst forth from the tent, tearing off clothes and streaking onto the night, plunging into a nearby crystal clear lake and splashing and howling like naked new wolves. It was amazing. I felt an emptiness, but rather than a sick cavity it was a space for new growth. And slowly, surely... About 8 months later, I stopped being so fearless. I started to fear again, and with the fear came the realization that I was concerned about losing something. Which made me realize I WANTED something.
Which meant my heart was working again! Yay!

"Hello, Ember," I greeted this sensation. "I know you."

I didn't know how, I didn't know when, but I knew I needed to get my ass BACK to LA- not for revenge, not as an "I told you so," but because I am in crystal clear communication with my fully-functioning heart and I know EXACTLY what I want. I will say with a New Wolf Howl: I want to write for a syndicated comedy show.

Lo and behold, the moment I Babe-Ruth'd it and pointed out exactly where that ball was headed, things began to happen. Series of events and circumstances and my own hand in the puzzle all came together and here I am, and last week, I had the most amazing dream:
I was in my childhood backyard, and I was climbing on the climbing-structures my parents had built to get a good angle with my bow and arrow- there were alligators everywhere, and I had to take them out because in my dream, I knew I was pregnant.
And with a baby on the way, you gotta clear out all the alligators, right?
I could not ask for a clearer message: I am in a safe place now, using the foundations of my upbringing to gain a good vantage point in what I know is a battle for the future. I am safe, I am a crackshot with a bow and arrow, and I know exactly what to do. And the best part of all: I can feel the new precious life inside of me- a little glowing, protected Ember no alligator can ever reach.
Because this time, Mama's protecting her California Dream herself. 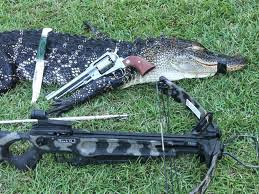