My boyfriend's name is William. Matthew is his middle name, but since he is a "the third," he's chosen to go by Matt for most of his life.
I already had 14 Matts in my phone when I met him, so when he suggested I enter his number, I asked him if he'd rather be the 15th Matt or the first Will. I reminded him I'd already dated two Matts to disastrous results.

He asked me, "on a scale of one to Ryan Gosling, how sexy do you find the name 'Will?'"
"Baby Gooses!" was my earnest and eager reply.
He chose WISELY, and has been my Will ever since.
But I'm not one to let a name stand in the way of a Titular Pun, so here it is:

When I first got married to my ex, way back in 2004, I'd moved straight from my very sheltered life at Mom and Dad's to living with my (at the time) husband. I was super new at adulting, and in one of my many, many classic newlywed mistakes, managed to dye most of my husband's underwear and socks a delightfully cheery shade of pink when I washed them with a rogue red sock.

My ex took it in stride, but he was quick to suggest that we separate our laundry from that point on. He took care of his stuff, I took care of my stuff. And I profoundly regret agreeing to that, because it set a precedent for Not Figuring Shit Out Together.

A year later, when my whirlwind disaster-journey landed me safely living with my then-boyfriend Paul, I wanted to do everything I could to express my gratitude for the multitude of kindnesses Paul had shown me. And so I very bravely did a load of his laundry.
*author's note: Laundry = Love. Kudos to any man who does his ladies' laundry. And ladies, if you're doing laundry for a man you're not living with, you are a chump.

For those of you following this blog, you may recall how profoundly struck I was while feeling the heft and weight of his jeans as I'd folded them. These were his working pants, in which he installed theatrical lighting. They were rugged and coarse and very different from my "girl jeans." The density of these pants caught me off guard, and I realized: I'd never folded "guy clothes" before. I instantly felt a bittersweetness strike my heart. I wish I'd folded my ex's jeans for him. I wish we'd tried to try. I wish he hadn't given up so easily.
But it was just easier to separate.

Cut to 4 years later. Present day. 2015.
I wind up working away from home more frequently than my boyfriend, and often I'll come home to find he's done our laundry. This is miraculous in and of itself, but my favorite part is the elaborate thong-chandeliers he makes while drying my delicates from our ceiling fixtures. 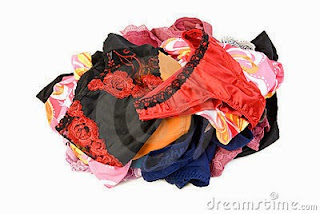 This, but like, hanging artistically from our kitchen light. It's good stuff.

Keenly aware that I was slacking on my end, I insisted on helping with the next load.

Our heaving hamper finally let us know that today was the day. My boyfriend loaded the first load of our clothes in the washing machine and dryer downstairs in our building's tiny laundry room. I took over after that, and throughout the day, I made trips up and down the stairs, to the clothesline and back, and performing the sheet-folding dance in our tiny living room.
Later, true to form, I overloaded the washing machine and caused it to break. 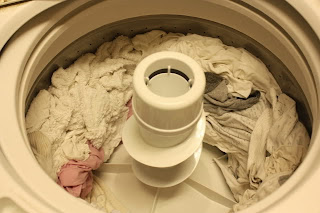 This much, times, like, five. Oops. I always assume if the lid closes, it's good to go.

In sheer denial and ignorance, I loaded our sopping wet clothes into the dryer and broke that too.
I made a guilty run to the LaundroMat down the street with the last of the whites as my boyfriend attempted to repair the machines I'd murdered.

Finally, with a view of a California sunset kissing the drought-yellowed hills, I'm folding our clothes.
His clothes. My clothes. Our clothes. There's the batman shirt that he always wears. There's the grey H&M shirt he wore out to our friend's birthday party. A replay of the days we've lived the past month flashes as I fold. We've had a lot of fun in these clothes. And also out of them. My mind wanders...

And then I get to his pants. 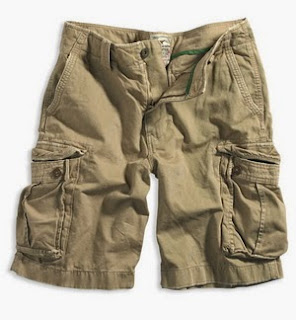 Shorts, actually. Cargo shorts because he knows how much I love their pockets. He purchased them in duplicate so he'd have a place for my phone when we walk. A special pocket for chapstick because he always has chapstick and I fucking love that about him.
I feel the weight and the heft of this fabric, feel their rugged velcro and zippers in my fingers as I flip them neatly in half, then half again.
I remember my guilty confession to him about how I ruined the laundry, how I was sorry, how I'd fix it.
And I remember him telling me not to worry, smirking and saying that he'd give me plenty of opportunity to perfect my technique over time. Lots and lots of practice, he says. And I am grateful, because his first instinct wasn't to bail.

2004 Me is punching the lavender-scented laundromat air. 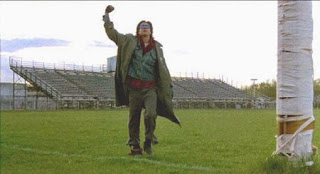 It's OK that I made a mistake. It's OK to keep trying.
Clothes are going to keep getting dirty and machines are going to break. Laundry gets ruined occasionally.
(In my case, twice every 10 years.)
But he doesn't mind.

I finish my folding and place the stacks of fresh clothes in my bag, ready to come home to someone who makes me feel shiny and clean.
Posted by Jaime at 8:45 PM